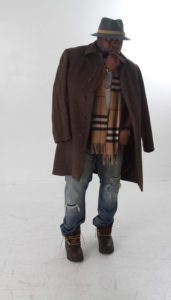 Drayton Goss also known as Don Morock was raised in Brownsville Brooklyn and moved to Bed -Stuy by the age of 15, Morock was always a popular well dressed kid, mostly known for his fancy passes & ball handling skills in local basketball tournaments , but Morock always had a ear for music. Growing up he was a huge fan of Big Daddy Kane. Morock never took music serious but always knew good music when he heard it. One time playing around at home, a friend suggested that he take it serious, so he figured he’d give it a shot. Morock’s Cousin Yogi was in a Group called Cru ,signed to Def Jam and managed by CEO Mark Pitts. Morock began dropping freestyles on local mixtapes, and as soon as Yogi heard his music & clever punchlines he decided to get him in the studio. Morock formed a Group with his younger cousin, Classy Freddy Blassy and their music got the ear of Mark Pitts, Popular underground DJ’s Stretch & Bobbito was the first to play his record. In no time Morock was being recruited by music heavy weights such as La Reid, Teddy Riley, D.Dot and a few others. Morock ended up doing a development deal with Sony so he wouldn’t be locked in to a long contract, His cousin Yogi was apart of the “Hitmen” a group of producers managed by Sean Puffy Combs, played a record for him which was a posse cut record titled “Hoodfellaz” and Puff wanted to sign them instantly. Although Morock & Blassy were still in a contract with Sony they waited the contract out and began working with Combs, Combs had a couple of challenges for them, they had to prove themselves by rapping alongside Chris & Neef from Rocafella and they had to go on the road to and show they can be responsible. Both task’s were passed and he put Morock on the Carl Thomas “Emotional Remix”. In 2001 Puffy finally made it official by signing the group Hoodfellaz to The Bad Boy Empire. Morock then Jumped on the tweet “Call Me Remix, but his big break record was one that he didn’t perform on. Puff singled Morock out to write for him and while working on the Saga Continues album, Morock appeared & wrote 3 songs including the anthem “Bad Boy 4 Life” which according to The Source Magazine & many others was one of Hip Hop’s greatest lines of all time “Don’t Worry If I Write Rhymes I Write Checks”. Morock also work with or shared writing credits with names like Pharrell, Usher, Jennifer Lopez, Busta Rhymes, New Edition, Swizz, Trina, M.O.P, Foxy Brown, Papposse,
G-Dep, Black Rob, Total, Mario Winanas,
DJ Self, DJ Envy, DJ Clue, & DJ Funk Master Flex just to name a few. Morock also produces music for local up and coming artist and helps compose records, coaches basketball teams and is currently in talks to write his first screen play all while hosting the Internet hit “We Say What They Can’t Radio Show” on Dtfradio every Sunday 12p-1pm
He’s now trying on his executive hat with business partners & friends Pyro & Ps Dot
Owning their own podcast station and developing shows under the WSWTC umbrella. With Morock’s creative mind this will the first of many ventures that should be a success.