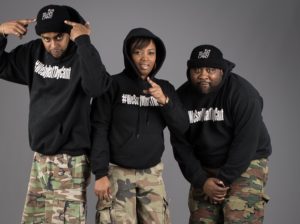 Don Morock, Pyro The Fireman &  1st Lady Cinnamaxx. Originally, this was a  sports show called The Locker Room, Don Morock wanted to extend the brand. He asked Pyro to join him as Co host and executive producer of the show. Looking for a female co host, the team held auditions and found Cinnamaxx who stood out among a group of talented women.

The show allows guest to be themselves and converse with the panel as if they were in the barbershop, hair salon or any atmosphere that allows them to be comfortable.

The instigator/Moderator, Brooklyn’s own Don Morock, a former Bad Boy artist/writer from the group Hoodfellaz , he’s also a music producer, Morock finds different ways to start trouble by being sarcastic with the panel & guest.

Pyro the Fireman, also from Brooklyn  had a development deal with Def Jam along with some childhood acting, he brings the sense of balance & stability to the panel with his professionalism & views. He’s a hard worker that’s also known as the “Research God”. If you’ve done anything he’ll find out about it.

Cinnamaxx who’s is the definition of Bed Stuy with her bubbly personality, harsh & straight forward opinions, she puts the panel & guest on the spot with a Crazy “lovers lounge” question or 2 and one things for sure she will definitely Say What They Cant.

With a bright future ahead the sky is the limit  so get use to hearing the name..