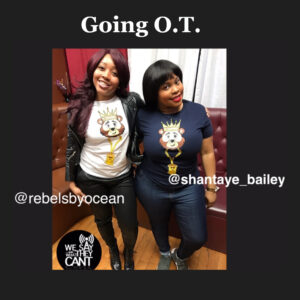 https://www.instagram.com/rebel_maven/?hl=en
OCEANS BIO:
What do you get when you combine ratchet, optimism, ambition and creativity?….OCEANA! Oceana Porter is an entertainer with a passion for life, fitness, knowledge and media.

Oceana is the owner and CEO of the dance fitness company named Rebels By Ocean, which specializes in transforming the lives of women through weekly dance and fitness classes. By removing boundaries, limitations, negative energy and words; every class is filled with positivity. During it’s first three years of operation, Rebels By Ocean has hosted multiple uplifting workshops, a charity basketball game, vision board party, Say Yes to the Prom Dress and private events.

Oceana currently hosts her show “On the Rise with Ocean” where she interviews talented guest on Taye Bailey TV. Each guest has the opportunity to share their story, play a round of “It is what it is” and inspire others. She is also the co-host of the podcast Going O.T. with longtime friend Shantaye Bailey, where the dynamc duo discuss relationships, #teatipswithTaye and so much more. However, her hosting resume doesn’t stop there with events like the Deans List Tour Award Show, On the Rise Concert Series, the Deans List Tour, the Daze Summit Website Launch and the Dope Fresh and Talented Musical Showcase all under her belt.

As a firm believer that through God all things are possible and to whom much is given, much is expected. Ocean builds her community as a board member for Purposefully Pretty Inc. by using her voice, gifts and resources to create opportunities for the community to learn and grow . These opportunities allow her to give major keys to the youth while finding their purpose in the world, creating goals and educating them on how to accomplish their aspirations.Living by the words of Mahatama Ghandi, “Live as if you were to die tomorrow. Learn as if you were to live forever.” Oceana understands the sky is not the limit and positivity is the key to success.

SHANTAYE’S BIO:
I see no wrong in building a network that caters to rising stars. Lets build a Hollywood right here in our own world. If you are an artist, an author or a nail tech, let me tell your story. Let me write your bio, edit your book or even film your event. I handle all things media & writing and want to be the one to bring awareness to you and your brand in ways that you couldn’t imagine.”

Shantaye Bailey is a Certified Multimedia Journalist who specializes in writing, media and storytelling. Shantaye is the founder and CEO of TayeBaileyTV, an up and coming Broadcast Network bent mainly towards up and coming stars in different fields. At just 20 years old, Shantaye graduated with a Bachelors Degree in Criminal Justice, soon after obtained a Paralegal Certificate and graduated from the New York Film Academy earning a Certification in Broadcast Journalism, her hardest but one of her greatest accomplishments.

Despite her criminal educational background, she is currently dealing with a passion for writing and conveying her Journalistic skills that she simply cannot control! Everyone that knows her personally will agree that at some point in their time of knowing each other, she has expressed her interest in writing, broadcasting, interviewing and being able to freely express her thoughts on experiences as well as daily observations. Nothing comes as natural to her as writing and producing does.

To date, Shantaye has spent some time as an entertainment blogger for Cloud9TV.net; home of the hit web series Money & Violence, a relationship editor for a woman’s magazine; WMDSF, launched her website; ShantayeBailey.net, her home webpage and launched her network TBTV. Shantaye is currently the creator, Executive Producer and director of her first and current running show on the Network, On The Rise With Ocean hosted by and Co-Produced by Oceana Porter. In between her time producing OTRWO she is a co-host of the podcast “Going O.T.” with Ocean in which the two discuss all relationships and share #TeatipswithTaye. Be sure to look out for her first published book as well as her first mini-documentary on two Queens DJs; Dj Lennox & Dj Gmoney. Nothing but success is in her future.
EP 15 FEAT DAVIE JAY